Look at old photos. If you don’t have any, look around your neighborhood for similar houses and see the kind they have.  You can usually tell if the shutters are original.  Keep in mind that your house may have been built in 1800 and the shutters replaced in 1900 with a style popular at that time.  Shutter styles and hardware are also regional to your part of the country. You can contact your local historical society, though I doubt if any of them could provide any help.  Try them anyway; if not, call a Preservation Architect and ask for a recommendation.  Your State Historic Preservation Office will have a listing.

Board and Batten shutters and Raised Panel shutters were used during the 18th century and into the 19th century.  Strap Hinges were used and Rat-tail style tie-backs were most popular. 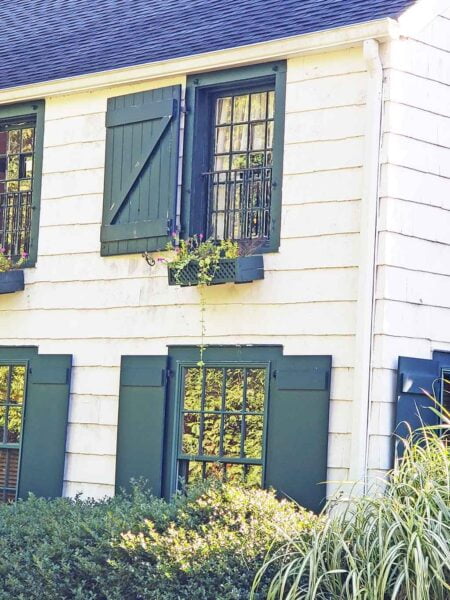 Around 1800-1830, Butt hinges came into use but were not popular since they broke easily. Strap Hinges were the most popular.  Tie-backs were mounted on the sill.  Most styles were dependent on what the local blacksmith produced.

At the time of the American Civil War, the Industrial Revolution was in full swing and steel suddenly became less expensive.  Acme Lull & Porter, Butt and “H” Style hinges were being produced and became popular, although Strap hinges were still available.  “L” shaped surface mounted hinges came about in the late 19th century.

From what I have seen in the New Jersey area, many Victorian and Colonial Revival house have Edge Mounted Acme Lull & Porter hinges with operable louvered shutters.  This is the same for pre-Civil War architecture, but in this case, probably, because their original strap hinges were replaced with the more contemporary and popular hinges of Victorian times.  Unfortunately, today, shutter manufacturers are selling Surface mounted hinges for every type of architecture.  Please be aware of this.

“S” style Shutter Dogs were mass produced in 1920’s.  They should be used only on houses built during or after this period only.

Early 20th century architecture such as Arts and Crafts and Bungalow were without shutters. 1920’s panel shutter with cut out on first floor. Black half panel with cut out and fixed louvers on the 2nd floor.

The images above show shutters from the first and second floor. I was surprised to see a 1920’s Colonial Revival house following the format of an early 18th century house. This house has paneled shutters on the first floor and louvered on the second floor. 1920’s Board and Batten shutter with cutout. Never have spaces between boards. 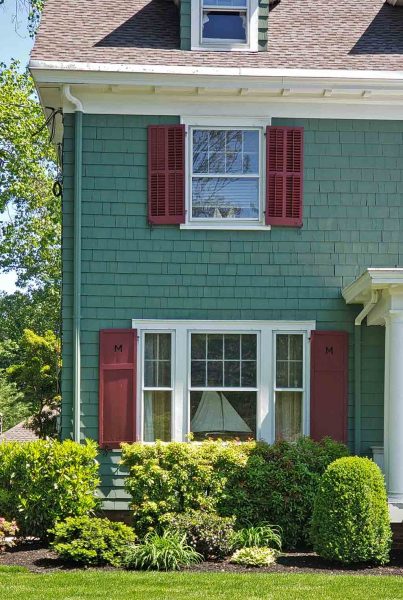 On a Colonial Revival house shutters can be solid panel on the first floor and louvered on the top floor.

Do NOT combine shutters on other style homes. As you read earlier this was common before apx the 1860-70’s. Never for a Victorian.

Can I Have Shutters on Casement Windows?

This is a question I get quite often. Most of the photos I am sent by homeowners asking this question are of poorly designed newer homes. The design is lacking so homeowners look to installing shutters as a fix.

For shutters to look right on a house, decorative or not, they need to look like they can work. You already read that size and mounting is most important. To open or close a shutter you need to be able to easily and quickly open the window and reach out to grab the shutter to open or close it.

No problem with double-hung windows. However with American casement windows that open outwards this cannot be done. Casement windows so popular in Europe open inwards and that is why you see shutters on so many windows.

So basically the answer is that if your casement windows open outward you should not have shutters. On the other hand who is to know? What you really need to understand that shutters are the icing on a cake. They will not provide curb appeal to a house that does not currently have curb appeal.

Some of the pictures of casement windows I am sent are just awful. First all windows must have a 4 inch minimum window casing. If a brick house there needs to be a substantial brick mold surrounding the window. The actual window should be nice looking and not a giant window or people will laugh.

If you have a smashed up car, putting a fancy hood ornament will not make your smashed up car look good. You must first fix the problem before doing something new. 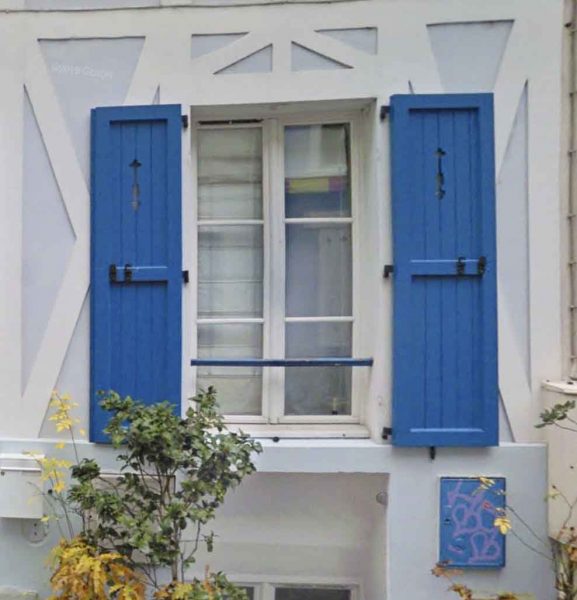 Casement window with shutters in Paris. 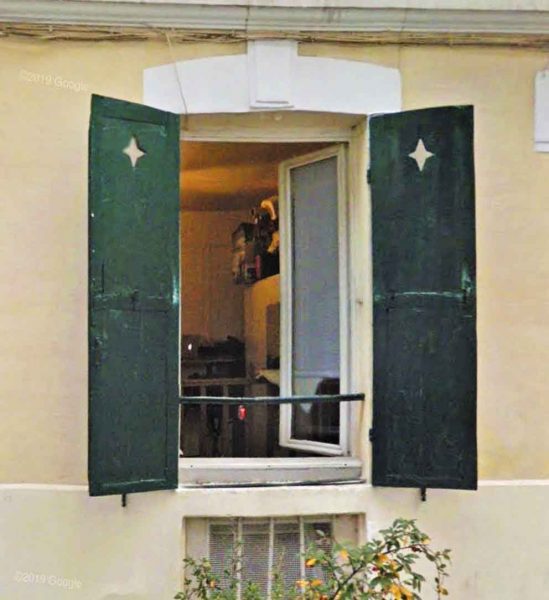