Women’s fashion and architecture came together in home design during the early 20th century.

The women’s shirtwaist, a very popular style during the late 19th and early 20th centuries,  is widely known as the Gibson girl look.

Well this style was so popular that it was introduced to buildings of the time creating a new look for homes called shirtwaist architecture.

Let’s first examine what this fashion was all about.

I would like to thank Debbie Sessions owner of the site Vintage Dancer who helped me with the information below. What is a Shirtwaist?

The terms for women’s clothes can be a bit confusing. The upper part of a women’s dress in the 1800’s was called a bodice. Then around the turn of the century fashion changed from the style of a one piece dress to a top and a skirt. The top was called a “wasit”.  A “waist” was later called “shirtwaist” and then eventually a blouse. This shirtwaist is like a man’s shirt. It was light, loose, un-structured with buttons at the back (later in the front) and was worn as a separate with un-matching skirt.  The two pieces together contributed to the Gibson Girl look. The shirtwaist blouse was regarded as the model shirt for the independent working woman. At the turn of the 20th century, production of the shirtwaist was a competitive industry. In Manhattan alone, there were over 450 textile factories, employing approximately 40,000 garment workers, many of them immigrants.

The shirtwaist, however, came to represent more than a momentary fashion trend; the blouse was a symbol of newfound female independence in a time of progressive ideas. With their own jobs and wages, women were no longer dependent on men and sought new privileges at home and at work. The figure of the working woman, wearing the shirtwaist blouse and freed from domestic duties, was an iconic image for the women’s rights movement. (Credit: PBS) The 1910’s saw a shift away from the popular title of “shirtwaist” to the even more feminine sounding “shirt blouse.”

By the end of the 1910s the specific elements that distinguish between “blouse,” “shirtwaist,” and “waist” became almost non-existent.

Beltline of Shirtwaist is Raised Higher

From the separation of top and skirt being at the waist another style became available with the separation raised higher. This was not as high as an Empire waist but somewhere in between. (photo’s courtesy of Vintage Dancer)

1908 dress with belt-line at center waist. 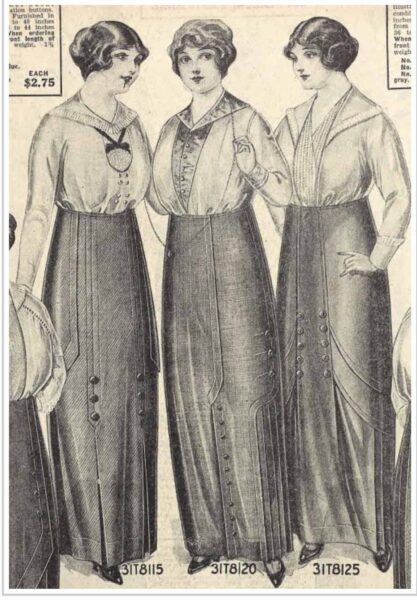 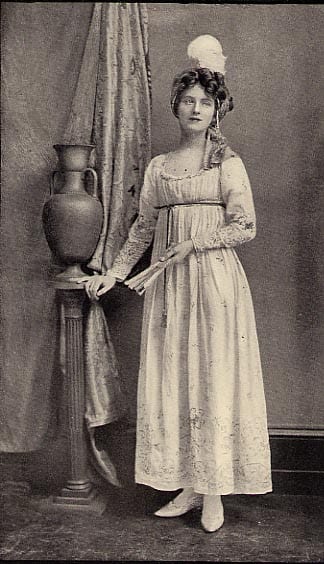 This dress is from 1800. The Empire waist belt-line is highest.

So the term Shirtwaist was for a women’s top. Although a shirtwaist can be many styles, the architectural shirtwaist resembled the raised belt-line of women’s fashion.

What is a Belt Course on a House?

A belt course, also known as band molding or banding, is an architectural term for a horizontal piece of exterior trim.

The trim is about 5 inches wide that runs horizontally around a two story house where the first floor meets the second floor.

The purpose of the belt course or band is to transition between different sections of the wall of the house or different siding materials. Where, for example, upper-story shingles meet clapboards there has to be a way to end one material and start another in a weather-resistant joint.

Think of how wearing a belt can act as a punctuation at the waist separating the shirt from the skirt as shown in the women’s fashion images above.

On a brick structure, the band or belt can be limestone or a contrasting colored brick.

It can also be used to interrupt a monotonous wall or put more or less visual emphasis on the building’s massing.

Many times a house will have a belt course but it has been lost due to insensitive remodeling. Shirtwaist architecture takes this belt-course located at the base of the second floor and pushes it up about 4-5 feet higher. It actually makes the 2nd floor look squashed and more like attic space instead of a full floor. This style was popular on Prairie style and Foursquare houses in the nineteen teens into the 1930’s. The belt-course located at the center of the house when pushed up higher becomes a sill-course since it is even with the window sill on the 2nd floor.

Although the shirtwaist in women’s fashion encompassed a belt-line both at the center waist and higher, the shirtwaist term in architecture refers to the higher waist. 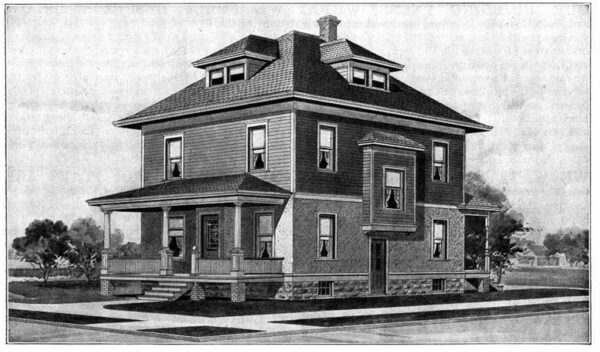 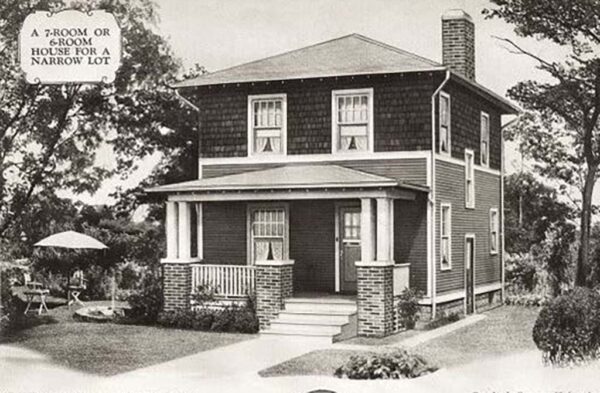 Now you know how to recognize Shirtwaist architecture.