When choosing a porch ceiling color, most people probably would select a light blue. The majority of late 19th century Victorian and Colonial Revival homes have porch ceilings that are painted a light blue with a greenish tint. There are many reasons for this:  blue is a soothing color; an insect repellent; protection from evil spirits.

Many porch ceilings are composed of bead-board.   This bead-board was most likely originally varnished and later painted.

Paint curators have found evidence for use of a strong turquoise blue on late-nineteenth-century Queen Anne-style porch ceilings and the California Historic Colors of America shade called “Veranda Blue” is a good match for that “Victorian” blue. On Colonial Revival-style houses, a blue related to the typical Prussian blue pigment might be more suitable: California Paints’ “Seaside” (DE5765) is typical and somewhat less turquoise. For a lighter blue ceiling, “Skyscraper,” one of California Paints’ 20th Century Colors of America, is a good option. If you aren’t prepared to go blue on your porch ceiling, a safe bet is to paint the porch ceiling to match the rest of the trim on the house.

The bead board porch ceiling in my 1910 home in New Jersey was originally stained and varnished. Sometime after that it was painted various shades of blue and turquoise. I was advised and now have Sherwin Williams – Blue Sky #0063 for a porch ceiling color.

Not all porch ceilings were painted blue however as shown in this 1898 paint catalog.

Why are Porch Ceilings Blue?

Read this article: The Why’s Behind the Porch Blue Ceiling

If you do not have a Victorian home or just do not care for a blue porch roof, I suggest you then paint the ceiling a brown to match a stained wood color. If you are not happy with just a brown paint you can try a faux finish to make the ceiling look like varnished wood.  I do not recommend removing the ceiling paint for your guests will only glance up at the roof and paint removal is a lot of work for a minimal result. Another good option for your ceiling is to use the trim color.

Find Out More About Porches... 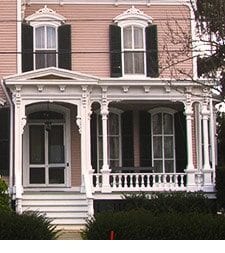 What you need to know about your porch before it's too late! 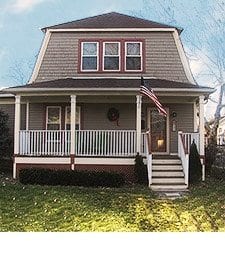 Is your house a Clown House? 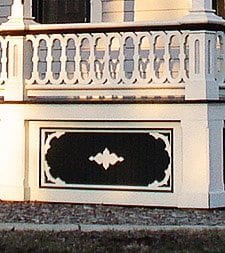 Learn how to do it right.