Historic lawns and how today’s modern lawn came about is probably something not many people would ever stop to think about.

Today however historic and modern lawns are something we all need to understand for lawn care has gotten out of hand and has a huge impact on our environment and our pocket books.

Big business has as usual made big profits from convincing (brainwashing) homeowners to follow their standards for curb appeal. 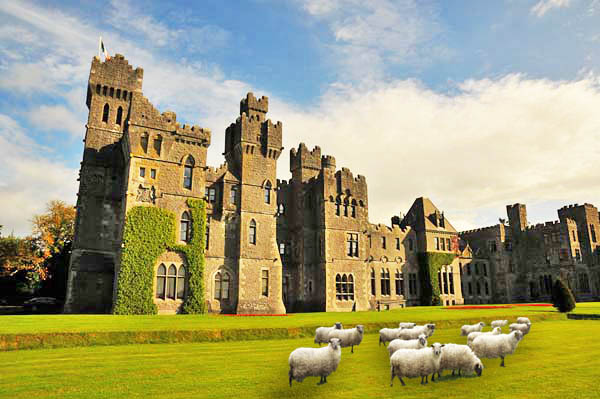 Lawns originally became popular with the aristocracy in northern Europe during the Middle Ages.  Grassy fields outside of castles were important to be able to see the approach of intruders at a distance. The early lawns were not always distinguishable from pasture fields. The damp climate of maritime Western Europe in the north made lawns possible to grow and manage. 1

Before the invention of mowing machines in 1830, lawns were managed very differently. They were an element of wealthy estates and manor houses, and in some places were maintained by the labor-intensive methods of scything and shearing. In most situations, they were also pasture land maintained through grazing by sheep or other livestock. Areas of grass grazed regularly by rabbits, horses, or sheep over a long period often form a very low, tight sward similar to a modern lawn.2

1806: U.S. President Thomas Jefferson, an avid horticulturist, was among the first to replicate European lawn styling in America at his Monticello estate.3

1876: The U.S. Department of Agriculture (USDA) brought grass to the masses with lawn-growing displays at Philadelphia’s Centennial Exhibition.5 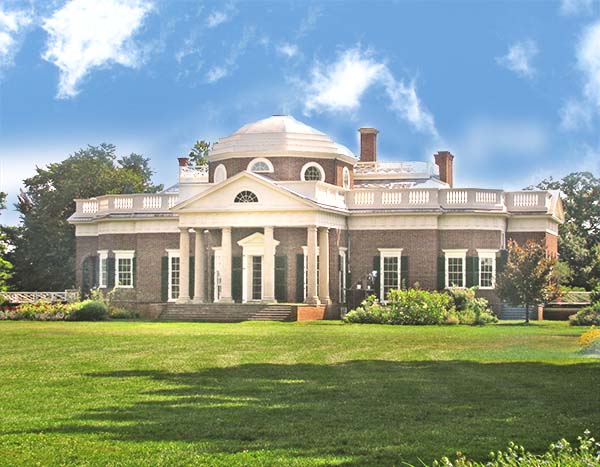 Monticello was the first American home to replicate a European lawn.

Late 1800’s: By the late 1800’s, the front lawn became an exhibitive space. The rise of printed gardening advice enforced this position. It became a part of regular news circulation—newspapers covered lawn care and flower cultivation in an effort to boost circulation—and consequently, everyday conversations. The awareness of lawns and their significance was made into an everyday occurrence.6

1930’s: Front lawns became standardized in the 1930’s when, over time, specific aspects such as grass type and maintenance methods became popular. The lawn-care industry boomed, but the Great Depression of the 1930’s, and in the period prior to World War II, made it difficult to maintain the cultural standards that had become heavily associated with the lawn due to grass seed shortages in Europe.7

Everything for the Lawn – 1896 Lawn catalog archive

Everything For the Lawn – 1905 Lawn catalog archive

Everything for the Garden – 1922 Garden catalog archive

In the middle of the 20th century, three overlapping developments helped promote the lawn across North America. The first was Levittown, one of the first cookie-cutter affordable-dwelling suburbs, built between 1948 and 1952 by Abraham Levitt and his sons William and Alfred on Long Island. This was the first American suburb to include lawns already in place when the first tenants took possession (see Levittown: Documents of an Ideal American Suburb – PDF). 8 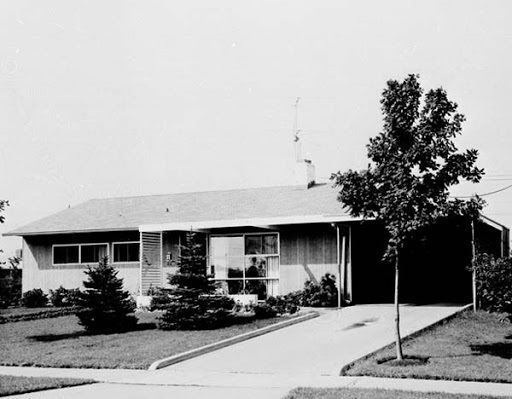 The Levitts, who also built subdivisions in New Jersey, Pennsylvania, Cape Cod, and Puerto Rico (several of them also called Levittown), pioneered the established lawn, which residents were required to keep up but forbidden to fence in. The importance of a neat, weed-free, closely-shorn lawn was promoted intensely in the newsletters that went out to all homeowners in these subdivisions, along with lawn-care advice on how to reach this ideal. 9

The second factor giving lawns a boost in the 1950’s was the need for inexpensive housing to accommodate returning GIs and their young families. These were soldiers, trained in neatness and obedience, and these were the conformist fifties, when everyone was on the watch for signs of Communism and crabgrass. At times, the two seemed morally equivalent.10 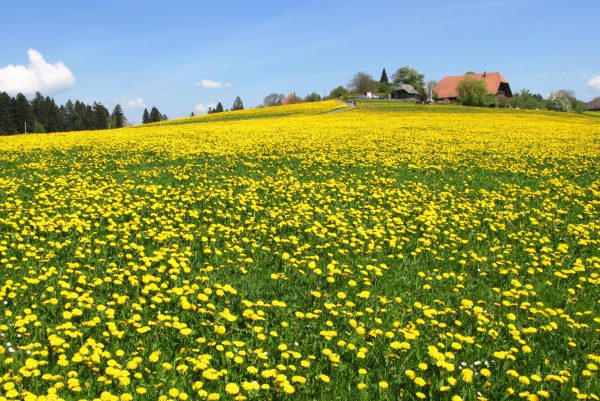 This innocuous “weed” is actually one of the most nutrient-dense plants you can eat. It blows superfoods like spinach and kale out of the water. Everything, from the flower all the way down to the roots, is edible.

Dandelions are a very beneficial plant and can look natural and beautiful. Read about the benefits of Dandelions.

With the advent of herbicides, in the 1940’s, still tighter control became possible. As long as a hand trowel was the only option, weeding a lawn had been considered more or less hopeless, and most guides advised against even trying. (A lawn “thickly starred with the glowing yellow blossoms” of dandelions “isn’t in itself a bad picture,” the journal Country Life in America observed consolingly.) The new herbicides allowed gardeners to kill off plants that they didn’t care for with a single spraying.11

One of the most popular herbicides was—and continues to be—2,4-dichlorophenoxyacetic acid, or 2,4-D, as it is commonly known, a major ingredient in Agent Orange.

Regrettably, 2,4-D killed not only dandelions but also plants that were beneficial to lawns, like nitrogen-fixing clover.

To cover up this loss, any plant that the chemical eradicated was redefined as an enemy.

“Once considered the ultimate in fine turf, a clover lawn is looked upon today by most authorities as not much better than a weed patch” is how one guidebook explained the change. 12 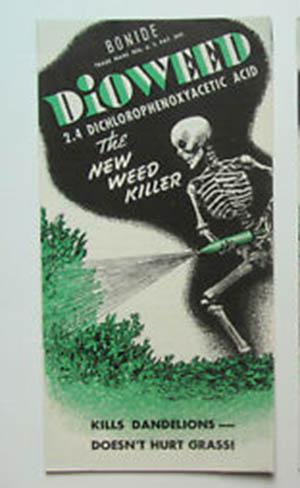 Today homeowners and corporations with their sprawling lawns spend a crazy amount of money maintaining a weed free lawn. Just because grass is green does not mean that these lawns are natural to our environment as we are led to believe. Modern lawns are merely a place to dump fertilizers and other chemicals to force grass to grow in an environment that they do not belong in.  These chemicals then seep into the ground or are washed away with the rain and end up in our drinking water. Water is an important resource that is taken for granted and lawns require a ton of water.

As with everything today big business rules us and the politicians and will not be going away anytime soon if ever. We are now at a critical time as our environment erodes away and global warming requires the use of more water to keep our lawns green. As human beings we need to be more responsible and listen to what our environment tells us not what businesses tell us so they can keep their investors happy.

The answer to the problem can be solved with a Clover lawn or a lawn mixed with clover.

Clovers make great lawns. They grow easily, and they don’t need as much water as grass.

They reach a certain height and stop growing, so you don’t have to cut them. 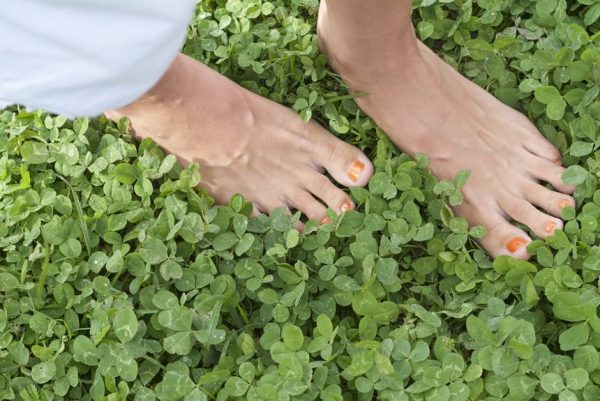 A Clover lawn seems like the way to go for the future lawn.

Clovers also make soil healthier. They grab nitrogen out of the air and put it in the soil, providing nutrition for more plants.

Yes – clover actually “fertilizes” plants around it naturally improving soil health for free and it doesn’t get into our drinking water like Scotts and other fertilizers.

Advantages and Disadvantages of Clover Lawns – This article is brief and to the point on what you need to know about clover. This convinced me to purchase clover seed. Read it now.

Microclover versus Dutch White Clover (the clover we know) by Penn State Department of Plant Science Read it now .

You really need to read the articles above. This is the smart way and more importantly the responsible way to go. It is more authentic for a historic house, you will help protect our drinking water and the environment, and save a ton of money.

We all know that there is an extreme problem with the decline of our bee population. I chose to purchase Dutch White Clover for it is the traditional clover that has the white flowers that bees and other pollinators love and require.

Yes I do believe that curb appeal is important and a well manicured lawn is the key to curb appeal. You may not have a picture perfect weed-free lawn soaked with chemicals but what is most important is neatness. My goal is to allow dandelions to grow, plant the new clover I ordered and spot kill some weeds. My most important maintenance will be trimming for a manicured appearance.

We all know that Round-up can cause cancer to humans and is also killing off our bee population but Monsanto, the corporation that produces Roundup is a strong corporation with politicians in their pockets so unfortunately money rules on this.

I have purchased 30% Vinegar through Home Depot. House-hold vinegar contains only 5% acetic acid therefore you would need to go to a place like Home Depot for a strong 30% acetic acid strength. Take 1 gallon of this vinegar plus 2 tablespoons of Dawn dish detergent. I put it in my old Roundup spray bottle to kill the weeds growing in my sidewalks etc. The weeds were brown within 2 hours. In other areas where there was shade the results were not as good. The vinegar still comes out to the same price as Roundup – maybe more but I will be doing something better for the environment. If you have any suggestions please post a comment below.

The following are two very well made videos about the history or lawns, the problems of modern lawns, and what we can do.

Do you recall your frustrations of trying to start a lawnmower that just won’t start?