The Roaring Twenties introduced us to flappers and a new lifestyle for a new generation.

Times were moving faster and people welcomed new ideas as they escaped from the old fashioned styles of their parents.

The old Victorian homes they grew up in reminded them of their parents’ days and that was now considered ugly.

This was the beginning of the destruction of the high style Victorian.

If you were stuck with one, the best way to make it new was to paint that natural interior woodwork white.  That would make it more modern appearing.

Plainfield New Jersey – once know as “The Queen City” had numerous grand Victorian homes.  But as you will see by August 1927 tastes had changed. 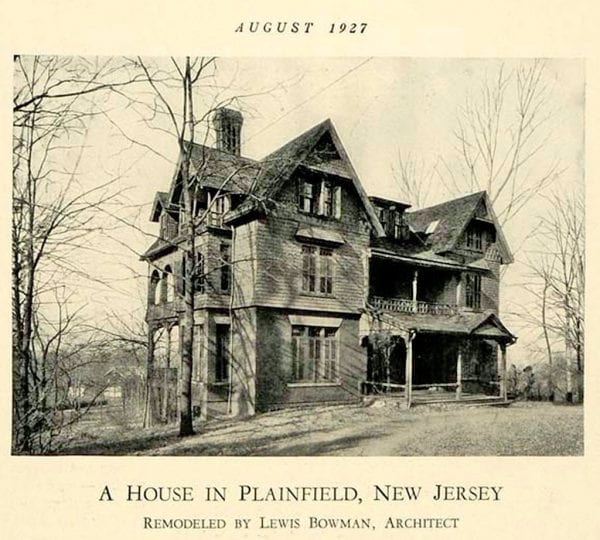 The following is from the 1927 publication.  (OHG does NOT agree with their analysis.)

“This house shown in its original state above is typical of many built twenty-five or more years ago.  Not only are the details bad and the ornament meaningless, but the massing lacks coherence and dignity.”

“It is interesting in comparing the remodeled house with this to note that its effectiveness was gained first by the paring of the house to its skeleton outline and then making it attractive by the use of the materials selected for its covering.  Notice that the porch has been extended to include an extra room.  Notice, too, how much the terrace and retaining wall add to the stability of the house.”

And here is the 1927 English Tudor home remodeled from the Victorian above. The same grand Victorian remodeled into an English Tudor.

Below we see this house as it is today. Cheapened by white plastic windows and lack of landscaping and absence of pride by the homeowner. English Tudor as it appears today. Unloved and uncared for by the homeowner.

Sadly this is one of many Victorian homes lost by either drastic remodeling or by the bull-dozer.  In the 1960’s the hippies in San Francisco painted their Victorian homes, not period colors, but boutique colors, which became known as “Painted Ladies”.  This rekindled the love for Victorian architecture.

As for the city of Plainfield NJ today, while many Victorian homes have been lost, many are now being meticulously restored.  The city has TEN historic districts and a very active Historic Preservation Commission.  A strong welcoming preservation minded community makes it easy for a new homeowner to properly restore an old house for the first time.